Each release has a unique version. The version number is immutable and the latest release commit is tagged with the version number. A proven and recommended versioning scheme is Semantic Versioning 2.0.0, see semver.org.

This model is very common in software projects, and applies well to Power BI projects, too.

Source control for Power BI is not officially supported by Microsoft, although it is required for enterprise-grade development. pbi-tools provides an open-source solution. It is a complete solution for both reports and datasets, i.e. allows to go back-and-forth between a PBIX file and a source code representation. Support for Dataflows is under development.

pbi-tools introduces the “PbixProj” format which is an extraction format for PBIX and PBIT files optimized for source control:

Injecting build/deploy metadata into the model

For end-to-end visibility between the DevOps system and the various Power BI environments, pbi-tools deploy supports PQ parameter replacement, allowing to inject information only known at the time of deployment into the model.

An example use case defines a model table called “Info” which is used to hold metadata information about the dataset, exposed via model measures. All table columns are hidden which displays it as a measure-table in Power BI: 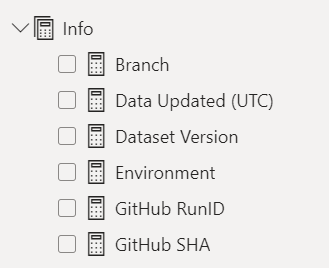 The PowerQuery source for the table references various PQ parameters in addition to a timestamp that’s resolved at the point of refresh:

Secondly, the pbi-tools deployment manifest declares various parameters that match those PQ parameters. With the dataset/replaceParameters option enabled, those PQ parameters will have new values injected, generally ones which are only available at the time of deployment (for instance, the source branch). The replacement will also convert the PQ parameters to simple scalar values which has the added benefit that those will no longer show up in the Power BI dataset settings (where values are editable to authorized users).

Lastly, each of the info values has a corresponding DAX measure defined allowing to expose the injected values in any report connected to the dataset. For instance, the “Branch” measure has this DAX formula:

This is a multi-row card visual displaying all Info parameters from the sample project: